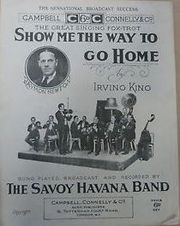 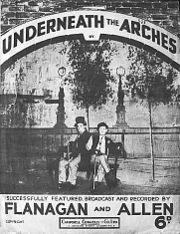 Two British musicians, Jimmy Campbell (1903-1967) and Reg Connelly (1895-1963), founded this company in 1925. Their reason for starting a new business was that they had written a song entitled Show Me The Way to Go Home and could not find a publisher. Their confidence in their song proved to be justified, because it was a success both in the UK and America. The two founders were good at both publishing and song-lyric writing. Using the joint pseudonym Irving King they wrote many successes with popular composers such as Ray Noble (Goodnight Sweetheart (1931)) and Harry Woods (Try a Little Tenderness (1932)).

It was not only through live performances at dances, or in musical shows (reviews or concert parties) or even through the new media of radio plays and records that songs became popular. Movies, which had only recently, around 1930, become "talkies" were powerful media for popularizing songs. Accordingly, Campbell Connelly started a publishing firm named Cinephonic in 1936 in conjunction with Gaumont-British, the film distributor. During the Second World War movies and their songs were great morale boosters, so the business grew steadily.

The Campbell Connelly catalogue contains many of the great standards of the 1920-1960 period: Sunny (Hebb), Have Love Will Travel (Berry), Big Spender (Coleman/Fields), Try a Little Tenderness (Connelly/Woods/Campbell), Underneath the Arches, If I Had You, The Cokey Cokey (Kennedy), and I Left My Heart in San Francisco (Cory/Cross).