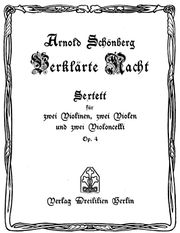 The most famous publication 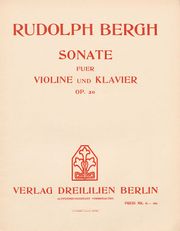 This Berlin firm was managed, and possibly founded, by Max Marschalk (1863-1940) in about 1901. It is most famous for publishing the early works of Arnold Schoenberg, including Verklaerte Nacht, Op.4. Marschalk, who studied at the Berlin Hochschule für Musik and became a singing teacher, was the musical critic for the Vossische Zeitung from 1894 to 1933.

In addition to Schoenberg, the catalog included Emil von Reznicek, Robert Kahn, and Artur Schnabel. It was sold to Richard Birnbach in 1934.

Dreililien's plate numbers were issued in a regular chronological fashion. Plate numbers are in the format of ###. Dates in italics are estimated.