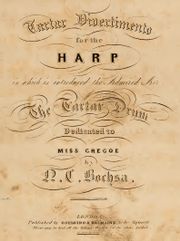 The firm of Goulding & Co. of London was established by George Goulding probably before 1784. Goulding was a musical instrument maker, music seller and publisher. He entered into a partnership in ealy 1798, when he established the firm Goulding, Phipps and D'Almaine. An Irish branch of the firm operated at Westmoreland Street, Dublin under the name Goulding, Knevett & Co. during 1803-1806. Knevett withdrew from the firm in 1806, after which Goulding, Phipps and D'Almaine took control.

The firm was succeeded by D'Almaine & Co., around 1834. Thomas Mackinlay briefly joined the firm in the 1840s. D'Almaine was a prolific publisher of vocal and instrumental music, including piano music by Czerny, harp music by Bochsa, and operas by Auber.

After the death of D'Almaine (the last survivor of the partnership formed in 1799) in 1866 the firm's entire stock of music plates was sold at auction.