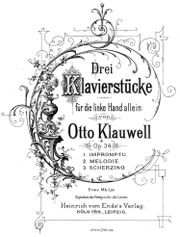 The firm was bought by F.E.C. Leuckart in 1907.
Among their publications were several works by Ewald Straesser, for instance (his piano concerto Op.8, overture Op.4, and others, from 1895-96 or so.)

Vom Ende's plate numbers were issued in a regular chronological fashion. Plate numbers are in the format of v.E. ####. Dates in italics are estimated.