This list is manually maintained, therefore some of the available pieces may not yet be linked from this page. For an automatically generated alphabetical list of all available pieces, please see
Category:Buxtehude, Dietrich.
A list of works in the composer category that are not included here can be found on this page.
Please consult the manual of style for creating composer work lists. 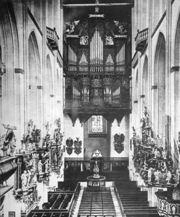 Buxtehude's Organ in the Marienkirche in Lübeck

The table below gives the following information (where applicable):

The catalogue is organized thematically, not chronologically, and contains 275 individual pieces. The Anhang ("Appendix") adds 13 spurious and falsely attributed works.

Fourteen trio sonatas (BuxWV 252-265) were the only works published during Buxtehude's lifetime. Originally published in two volumes, the first seven are now commonly referred to as Buxtehude's opus 1 and the other seven as opus 2.