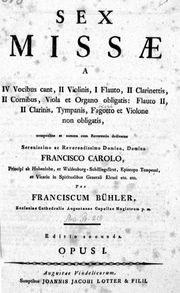 The Lotters were a long-standing family of engravers and publishers in Augsburg. Already in 1700 Abraham Lotter was active, and Johann Jakob Lotter (1683-1738) started music publishing in 1705. Other mid 18th century Lotters were Tobias Conrad (1718-1777), Elias Tobias (1730-1798) and Matthias Albrecht (1770s).Tobias Conrad Lotter was famous for his map production, and under the management of Lotter's son Johann Jakob Senior (1726-1804) from 1747 music publishing became important.

We find works by Falb, such as his Sinfonias (1743), then by several other composers including W.A. Mozart (Mass K194) in the 1790s. At the same time several historically important texts appeared, such as Leopold Mozart's Versuch for the violin (1754), a work which was so popular that it went through several editions and was soon translated into three languages, and Kürzinger's Getreuer Unterricht for singing and violin (1763). Leopold Mozart(1719—Mai 1787) was closely connected with Augsburg, having grown up there and maintaining his citizen's rights (Bürgerrecht) there even after moving to Salzburg. Finally, from around 1800 mainly sacred works by Johann Melchior Dreyer, Ignaz Franz Xaver Kürzinger and Franz Bühler were published. Tutorial texts continued, as with Bühler's anachronistic Supplement zu der kurzen theoretisch-praktischen Anleitung zum Generalbaßspielen (1822).