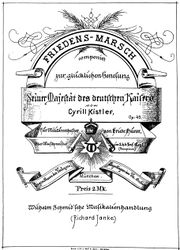 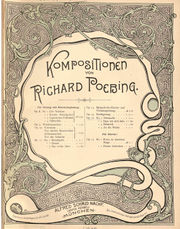 Works published by this Munich publisher first appeared in Hofmeister's Monatsberichte in 1875 under the name Schmid. By 1893, the firm's name had changed to Schmid Nachf. or Schmid Nachfolger (successor to Schmid). Examples of the name appearing as Schmid (Hensel), Schmid (U Hensel), or Schmid (Unico Hensel) can be found after 1912.
The firm's output was mainly light music: songs and music for piano and zither, athough some serious works are found in the catalog, such as Beer-Walbrunn's String Quartet No.3, and his Piano Quartet, Op.8, and some works by Cyrill Kistler, Emanuel Moór, and Adolf Sandberger.

Schmid's plate numbers appear in the following format: A. ## S.