DAVID CAMERON was born in Toronto in 1937. His father had won awards as a teenaged tenor, and went on to serious study. Although he never adopted music as his profession, he sang all his life, and in his later years also directed choirs. David's mother was an able pianist, a poet, and a composer, although she too never pursued these activities professionally.

As a schoolboy in Willowdale, now part of Toronto, David became a boy chorister in the choir of St. John's Church, York Mills. The director of that choir, Whitney Cameron (not a direct relation) was a British-trained musician of refined taste and high standards, and his choirboys had a sound training in liturgy as well as in choral music.

After elementary school, David attended Toronto's oldest public high school, Jarvis Collegiate. It was during his Grade 9 year, 1950-51 that he began the study of the organ under Catherine Palmer, another British-trained musician who is now retired from a distinguished career in Toronto. At this time also, he began to sing in the choir of Holy Trinity Church, which is now surrounded by the Eaton Centre in downtown Toronto. It was directed by the late James A. Coombs, a former singer at Covent Garden and the BBC Chorus, and an intensely demanding director who laid especial emphasis upon clarity of enunciation--something David has carried into his own work.

After a brief flirtation with undergraduate English at the University of Toronto, David settled upon music as his primary focus, and turned to the professional diplomas of the Royal Canadian College of Organists. As well as Catherine Palmer, his teachers included Douglas Bodle, the late Paul Murray and the late Eric Rollinson. He graduated as Associate in 1961, as Fellow in 1963, and added the then new Choir Training diploma in 1972. He also qualified as Licentiate, and later as a Fellow, of Trinity College of Music of London. Graduate study at SUNY Potsdam led eventually to a master's degree in the history and literature of music, and in later graduate work in St. Louis he pursued his interests in musicology, composition, and performance, leading eventually to the degree of Doctor of Music from the American Conservatory in Chicago. In 2013 the RCCO awarded him a second FRCCO, this time 'honoris causa', and in 2019 he received th--Charles David Cameron 19:56, 15 March 2021 (CET)e College's Distinguished Service Award.

After serving in several Anglican churches in Toronto, David moved to the United Church, serving as organist of St. Stephen's-on-the-Hill, Lorne Park, Trethewey Park, and Humbercrest United churches. In 1966 Robert McLean, the fine musician and poet who was then minister of Chalmers Church in Kingston, sought through his many contacts among musicians to find a new music director. This search led him to David Cameron, and in August 1966 David moved to Kingston, and to Chalmers Church. Chalmers Choir, with its paid core of eight singers and its live weekly broadcasts, was central to his work until his retirement from the church in June 2010. Under David's leadership, the Choir's repertoire encompassed the English cathedral tradition from the Renaissance onward, with a strong component of twentieth-century and present-day music, including his own compositions and those of other Canadian composers.

Over the years Dr. Cameron undertook various other responsibilities in Kingston. He taught for the School of Music (formerly the Music Department) at Queen's University from the inception of the B.Mus. program in 1969-70 until 2011, and he continues to nurture occasional organ students in the community. Some seventy organists have had important parts of their training here under David's demanding tutelage, and "Chalmers graduates"; can be found in churches and universities all over Canada. For a time he also taught courses for listeners at St. Lawrence College, and church music courses for students at Queen's Theological College, and for several years he also served the Theological College as musician-in-residence for its chapel services. In 1974 he founded the Pro Arte Singers, which he directed for its first ten years. Then, returning after a sabbatical in 1984, he founded Melos, which after 2005 became a choir with chamber orchestra specializing in early music. He retired from Melos in 2012, but remains its Music Director Emeritus.

As a composer, David Cameron is proud to regard himself as the musical grandchild of Paul Hindemith, having studied with two of Hindemith's post-doctoral fellows: the late Graham George here in Kingston, and Harold Blumenfeld in St. Louis. After writing in a dissonant mid-twentieth century style for a couple of decades, he has relaxed into a more accessible and more immediately harmonic idiom. His compositions range from songs and organ pieces, through choral music (much of it written for Chalmers Choir) to works for chamber groups and orchestra.

From the beginning of his tenure at Chalmers, David established the practice of building an ongoing collection of introits and hymn descants, and he continues to add to these. His music has been published by Harrock Hall and Sarabande Music, by the RCCO, on the Choral Public Domain Library site, where he contributes editions of older choral music as well as some new pieces, and here on IMSLP where he has placed his organ works, songs, chamber music and orchestral pieces.

Dr. Cameron is the author of several theory textbooks, which are used by teachers across the country. He recently revised versions of his Basic Harmony, Senior Harmony, and Counterpoint texts, for use in on-line as well as conventional teaching. David Cameron is a long-time member of the Board of Directors and Council of the R.C.C.O., and served as the College's national President in 2006-2008. From 2008 until early 2019 he chaired the College's Examinations Committee.

In private life David Cameron and his wife Frances Harkness, long committed sailors who spent their summers aboard their cruising sailboat, have settled back to enjoy a cottage on Sharbot Lake north of Kingston, Ontario, with several boats at their dock. Between them, they have six children, nine grandchildren, and so far one great-grandson.--Charles David Cameron 16:06, 24 April 2015 (EDT) 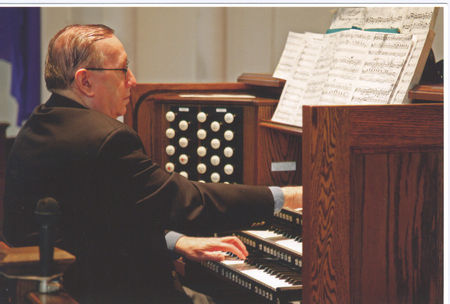