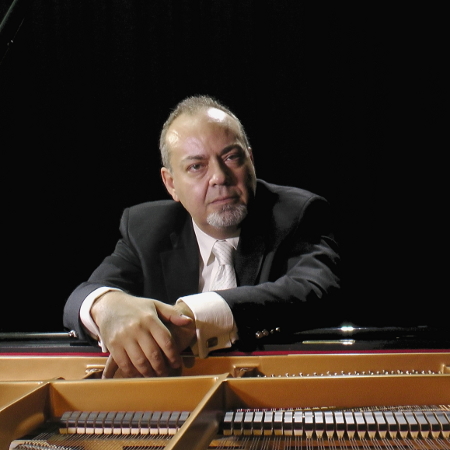 During his studies at the Royal Conservatory of Brussels, he was selected as one of only four students among the entire Conservatory of Brussels, for advanced and intensive training at the Centre Européen Des Hautes Etudes Musicales, an institution created by Vanden Eynden for the education of concert pianists from exceptionally gifted students. This institution is now known as Ecole Eduardo del Pueyo.

He won the prestigious Grand Prix Young Virtuoses in Antwerp at the age of 20. This led to his orchestral debut, performing the Third Piano Concerto by Rachmaninoff in the de Singel Concert Hall of the same city. Mehmet Okonsar (Okonşar) is included in the International Biographical Reference book: 2000 Outstanding Musicians of the 20th. Century published by the International Biographical Centre, Cambridge UK (Melrose Publications).

While living in Belgium and having Turkish and Belgian dual citizenship, on the request of former President of the Republic of Turkey, Mr. Suleyman Demirel, Mehmet Okonsar (Okonşar) was nominated “State Artist” of the Turkish Government and settled in Ankara with his wife, Lale, artist painter.

Mr. Okonsar (Okonşar) is a prolific composer of published, performed and commissioned orchestral, chamber, choral and piano music. His composing line is highly avant-garde and complex.

Also a musicologist, writer and lecturer, Mr. Okonsar (Okonşar)'s writings are published in several Turkish language music and related publications. His essays and analyses are offered in English and French and he is regularly invited for lectures in Universities on many subjects, mainly Music, Composing and Technology.

Mehmet Okonsar started composing music at the age of 11, his role-models were Arnold Schoenberg and Pierre Boulez.

A copy of Boulez's Third Piano Sonata, found at the library of the Ankara State Conservatory paved the way for his composing track. The French Cultural Centre of Ankara with the comprehensive mediathèque it then possessed, provided Okonsar (Okonşar) with overwhelming listening opportunities. Edgar Varese, Pierre Schaeffer, Iannis Xenakis and Olivier Messiaen shaped the musical sensibility of the young Okonsar (Okonşar).

After completing piano studies, he was trained at the Brussels Royal Conservatory of Music with one of Belgium's foremost composers of our time ("Grand Prix de Rome", a student of Henri Dutilleux): Madame Jacqueline Fontyn. He has also been coached by Paris Conservatory's famous analysis teacher: Claude Ballif.

The works of Okonsar were, right from the beginning, fearlessly exploring unusual forms and ensembles. During the eigthties atonal Jazz and similar contemporary idioms found in the music of Cecil Taylor, Bill Evans have been an additional influence to the ever-present extended serialism in the works of Okonsar (Okonşar). Other major extra-serialistic influences who shaped the music of Okonsar (Okonşar) are Krzysztof Penderecki, Iannis Xenakis and G. Ligeti.

The practice of electronic-music by Ligeti, Stockhausen, Xenakis, Pousseur and others in the sixties created a completely new and modern approach to orchestration. The classical orchestra's resources begun to be thought in terms of "sound envelopes", "filters", "formants" and so on. Mehmet Okonsar (Okonşar) followed a similar path in the nineties.

The music of Mehmet Okonsar (Okonşar) is highly structured and it is simultaneously inviting and challenging analytical approach. Today the composer uses computer algorithmic and symbolic programming languages (mainly LISP in the "Common Music" environment) to create a deeply "organic" structure which, according to the composer, is the sine-qua-non requisite for a musical composition to "stand strong".

This complex structural inner-core is presented in the score with a detailed, precise, intricate and refined musical writing.

Mehmet Okonsar (Okonşar) is recipient of the Gold Medal at the "Académie Internationale des Arts Contemporains" of Enghien, Belgium for his compositions.

By August 2014 he changed his first name from "Mehmet" to David Ezra.

(please note: those scores are watermarked "Web Copy - for personal use", they remain readable. If you like any, consider buying a printed score or contact the composer. Thank you for your support.)

"Oannés" & "Mr. Dunne" (1990) Two improvisational charts of appreciatively 7 minutes each, for one or several pianos. Premiered in Brussels by the composer. [revoked composition-waiting for a re-write]

"Mandel Fractal Studies" (1997) Five pieces for Piano based on fractal iterations and Strange Attractors. [revoked composition-waiting for a re-write]

"Emulation" (1989) Five Pieces for Piano. Premiered by the composer in Istanbul. [available here at: IMSLP.org]

"Chameleon" (1987) Three Pieces for Piano. Premiered by the composer in Brussels. [available here at: IMSLP.org]

His tools for composing are: