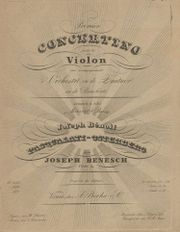 The firm of A. Berka & Co. was established in Vienna sometime between 1829 and 1835 (the firm is not found in the list of music publishers given in Whistling's Handbuch der musikalischen Literatur (1829) and Hofmeister's Monatsberichte only lists publications for the firm in 1835 at which point its plate numbers had reached the 1400s). Sometime between 1835 and 1844 the firm was purchased by Diabelli according to Hofmeister's Handbuch der musikalischen Literatur (1845). It is perhaps worth noting that the design on Berka's title pages was the same as Diabelli's. The firm published works for piano by J. Promberger, clarinet by Iwan Müller, cello by H. Fritz, voice by Heinrich Proch, and for violin by Josef Beneš.

Berka's plate numbers appear in the format of ####.