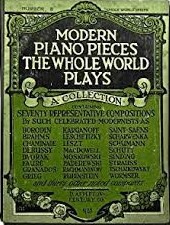 D. Appleton & Co. of New York, founded by Daniel Appleton (1785-1849) in 1831 was a general book and magazine publisher. Its greatest successes were betweeen 1850 and 1900. For example, its New American Cyclopædia (1858-1884) was a standard reference work. It also co-founded the educational publisher American Book Company, formed in 1890. The Appleton imprint is still used for medical texts.

From around 1900 to 1920 it issued The whole world series, collections of music scores edited by Albert E. Wier. Then in the late 1920s The Appleton Master-Composer Series appeared with piano music entitled ... at home; there were volumes of Tchaikovsky, Grieg, Schubert and Chopin.