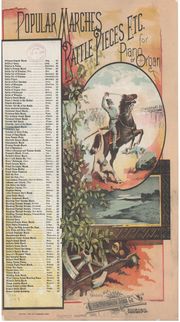 Silas Brainard (Feb. 14, 1814-April 8, 1871) opened a retail music shop in partnership with Henry J. Mould in Cleveland, Ohio in 1836. In 1845 the firm, now known as S. Brainard, began publishing sheet music. Around that time (1840s) Silas' brothers George Washington and Joseph Brainard established a music shop in Louisville, while his other brother Henry opened one in Chicago in 1848.

From the 1860s there was steady growth managed by the founder's family. In 1864 Brainard's sons Charles Silas and Henry Mould Brainard joined his firm, which was renamed S. Brainard's Sons. The sons, operating the business after Silas' death, acquired the plates of Root and Co. of Chicago in 1871. A branch office was established in Chicago in 1879 and in 1889 the firm relocated to that city. A Brainard retail presence remained in Cleveland with the H.M. Brainard Company, which continued, with the name S. Brainard's Sons until 1931.

Brainard began publishing the monthly journal Western Musical World: A Journal of Music, Art and Literature in January, 1864, renamed Brainard's Musical World in 1869. The journal continued to appear until it merged with Theodore Presser's Etude in 1895.

Brainard specialized in the publication of popular songs with piano accompaniment, piano pieces, and religious music.

G. W. Brainard's plate numbers were issued in a fairly regular chronological fashion. Plate numbers are in the format of ####.

Brainard's plate numbers were issued in a fairly regular chronological fashion. Plate numbers are in the format of #####.