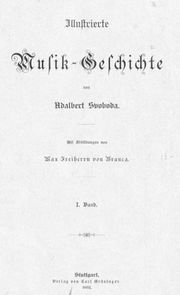 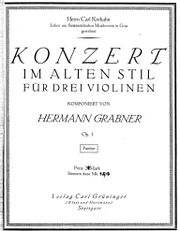 Carl Grüninger Ltd. operated in Stuttgart from 1867 as a general book publisher. From 1888 to 1929 it published the Neue Musik-Zeitung, which previously had been published by P.J. Tonger of Cologne, from 1880 to 1887. Some of Grüninger's books were on musical topics, such as Rudolf Louis' and Ludwig Thuille's Harmonielehre (1910) and some music history texts.

Among the music scores in its catalog were many easy piano works for domestic use, by composers such as Emil Breslaur, Aloys Hennes, R. Kerner, H. A Schefer, Johannes Feyhl and Karl Richard, some songs such as Die Jahreszeiten in Liedern, Op. 23, by Eduard Rohde, and some other works such as Hermann Grabner's Konzert im alten Stil, Op.1, for 3 violins (1915). The last musical item was a book issued in 1928.

In 1897 Ernst Klett and his brother-in-law, Julius Hartmann, took over the firm, and it has remained in the Klett family to the present day. Now known as Ernst Klett AG, it has grown into a holding company with interests in educational businesses of all kinds, from textbook publishing to kindergarten management and educational software.