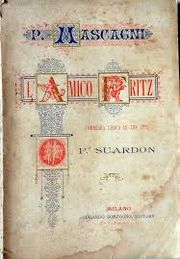 Casa Musicale Sonzogno is best known as the publisher of verismo operas in the 1890s. It has been managed in its nearly 150 year history by only two unrelated families: the Sonzognos (1874-1923) and the Ostalis (1923-present)

Giovanni Battista Sonzogno (1760-1822) founded the book and magazine publishing firm in 1804, of which the most famous product was the daily newspaper with the widest circulation in Italy, “Il Secolo” (1866-1927).

Casa Musicale Sonzogno was established in 1874 by Edoardo Sonzogno (1836–1920) the founder’s grandson. His first items were two important music magazines, “Il Teatro Illustrato” and “La Musica Popolare” and a series of operatic arrangements for piano. He then licensed Bizet’s Carmen in 1879. Then in 1890 the firm earned its place in history when it sponsored some competitions for new operas which encouraged composers such as Mascagni, Puccini, Leoncavallo, Giordano and Cilèa. Edoardo also built the Teatro Lirico Internazionale in Milan in 1894. From 1909 to 1920 Edoardo’s nephews, Lorenzo and Riccardo continued this work.

In 1923 in the midst of a slump, a savior appeared in the form of the cotton industrialist Piero Ostali, who was also a musician and composer. He championed opera composers such as Cilea (L’Arlesiana and Adriana Lecouvreur) Giordano (La Cena delle beffe and Il Re), Wolf-Ferrari (Sly, La Vedova Scaltra) and published other works by Smareglia, Lattuada, Lualdi, and Porrino.

Enzo Ostali, Piero’s son, took over the firm in 1945, and overcame the loss of the premises through wartime damage in 1943. Subsequently, from 1961 he encouraged contemporary composers such as Viozzi, Negri, Bettinelli, Meyerowitz, Chailly, Mannino, Ferrari, Hazon, Corghi, and Gentilucci. He was also involved in the foundation of the “Settimane Musicali di Stresa” festival.

From 1971 Enzo, in conjunction with his wife Nandi, published educational works and scholarly books and also critical editions such as Pagliacci by Leoncavallo. The Ostali dynasty continued: in 1984, Nandi Ostali took over management and in 1989 Piero Ostali Jr, Enzo and Nandi’s son, joined the firm. Casa Musicale Sonzogno published new composers such as Tutino, Pedini, Galante, Testi and Battiato.