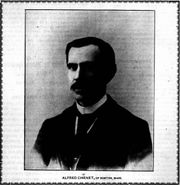 Alfred Chenet (b. 1854), a native of Ottawa, Canada, received his first guitar instruction in Montreal but his principal musical studies focused on brass band music, a point highlighted in his earliest biography. By 1882 Chenet had relocated to Boston, where he directed the French-Canadian Institute as well as a band he founded there. He began teaching guitar in Rochester, New York, in 1884 and continued that work in St. Louis the following year. By 1886 Chenet had returned to Boston, and secured a teaching position at the Boston Conservatory around 1896. The magazines recognized him as an active composer, too, and his studies and pieces were published and promoted in the BMG magazines through the 1920s. His one extended article, “The Guitar and Its Progress in America,” offered Chenet credibility, too, as an enthusiastic authority on the guitar familiar with the repertoire and techniques of the Old World masters. ("Guitar in America - Victorian Era to Jazz Age" by Jeffrey J. Noonan)
Table of Contents: Top - A B C D E F G H I J K L M N O P Q R S T U V W X Y Z - Chart

The following 2 pages are in this category, out of 2 total.