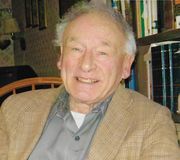 David Geppert was born in Chicago in 1921, and graduated from the Music School of Northwestern University in 1942. In 1946, after serving in the Signal Corps in the South Pacific during World War II, he took up his first academic position in the Music Department of Kansas State College in Manhattan, Kansas. In 1951, he and his family moved to Rochester, New York, where he earned a PhD in Theory and Composition under Howard Hanson at the Eastman School of Music in 1958. He was a faculty member and then professor in the Theory Department at Eastman from 1955 to 1970, during which time he also served as musical director of the Unitarian Church. He took an early retirement, moving with his wife Bonnie in 1970 to La Veta, Colorado, west of Walsenburg under the Spanish Peaks. An active composer throughout his life, David Geppert composed over one hundred works, including a symphony, two string quartets, chamber music, choral pieces, song cycles, multiple works for children (beginning and intermediate piano and cello), and three large-scale compositions for voice and piano.

The following 13 pages are in this category, out of 13 total.