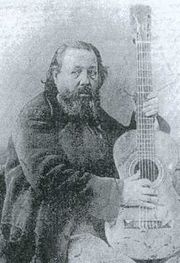 Trinidad Huerta was a Spanish musician, guitarist and composer born in Orihuela in Valencia ,Spain, and died in Paris. His second surname is written in different ways depending on the sources. Although he is hardly known among people today, he was known one of the greatest guitarist in the world at that time, and praised as "Paganini of guitar".

The following 13 pages are in this category, out of 13 total.