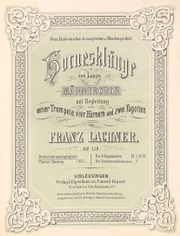 This firm, based in the small town of Schleusingen in the Thuringian Forest, half way between Frankfurt and Leipzig, and near Meiningen and Eisenach, was very productive in the field of vocal music, especially male choruses. The series Ernst und Scherz, original songs for 4 male voices edited by Julius Otto ran from 1846 to 1868 totaling over 60 volumes and 350 works. The firm was founded in 1833, and moved to nearby Coburg in 1892.

Conrad Glaser apparently did not utilize plate numbers until late in the firm's existence. Plate numbers in the format of C.G. ### exist possibly no earlier than the firm's move to Leipzig. Dates in italics are estimated.