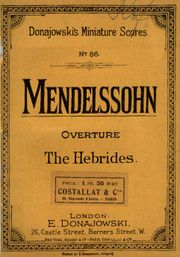 This London-based firm was founded by the composer Ernest (Alexander Adolphe) Donajowski (c.1845—1922) who was born in Calais, France and became a naturalised British subject in 1874. He appears to have established a music publishing business in the early 1870s.