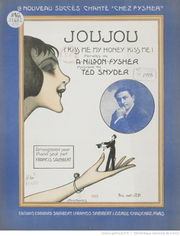 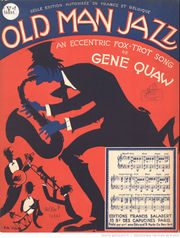 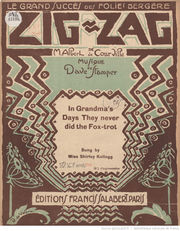 Edouard Salabert (1838-1903) founded a small music store and publishing house in Paris in 1878, but it had a tenuous existence animated only by its securing the rights to Sousa's marches. When Edouard became infirm, his 16-year old son Francis (1884-1946) took over in 1901. Francis Salabert single-handedly created France's Tin Pan Alley, the publishing and marketing of popular songs on an industrial scale.

With Phi Phi in 1918 (text by Willmetz and Soller, music by Christiné) Salabert started his musical comedy career. He was a gifted businessman. Firstly his marketing was aggressive, installing subtitles above the stage so that the audience could sing along. Then he was a tough negotiator with his composers, giving them big advances in return for exclusive publication deals, and while giving the composers the domestic copyright, insisting on the foreign copyright for himself. He also credited himself with the arrangement of most of his printed songs.

However abrasive this was in personal terms, this strategy worked, and composers flocked to his firm: Chantrier, Szulc, Cuvillier, Moretti, Pearly & Chagnon, Mercier, Gabaroche, Lattès, Van Parys, Bastia, Verdun, Sylviano, Oberfeld and Scotto. From 1920 to 1935 he was the king of musical comedy in Paris. He even persuaded serious composers to join him: Messager, Hahn, Honegger, Beydts and Pierné. He was also skilled at selling his properties abroad: "He was among the first to internationalize popular music"1—film music included. Salabert continued to expand throughout the twentieth century, publishing music of Les Six, and absorbing A.Z. Mathot (1930), Rouart, Lerolle et Cie. (1941) and Maurice Senart (1941) and Raymond Deiss (1946).

Music publishing was a different world in the post-war period, just a small part of the recorded music and movie business, and Mme. Salabert, who continued to run the firm upon Francis's sudden death in a plane crash, could not turn back the clock. Other smaller publishers, such as Tutti Intersong, published the chanson singers of the 50s and 60s, and American music flooded the world.

The company was sold to BMG (Bertelsmann) in 1994, who subsequently acquired Durand/Eschig/Amphion (2000). In 2007 BMG then sold its entire music publishing business (including Ricordi and Editio Musica Budapest, in additon to Durand/Salabert/Eschig) to the record label Universal Music Publishing Group (no relation to Universal Edition Vienna).