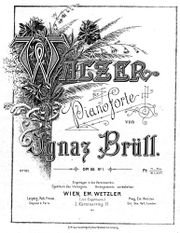 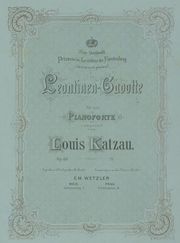 Wetzler in Prague, originally Schalek & Wetzler, published light music from 1866, continuing until at least 1899, while Wetzler in Vienna operated from 1881 until being bought by Doblinger in 1890. The latter's catalog included, in addition to dances, songs and piano pieces, some famous names of light music and operettas, such as Lehár and Oscar Straus. Violin works by Ignaz Brüll, V.A. Bartak, Adalbert Hřímalý, and Hellmesberger were also in the catalog.

Wetzler of Vienna had the distinction of being the first publisher of Hugo Wolf's songs, with one small collection in 1888 and then the large Mörike-Lieder collection in 1889. Frank Walker, Wolf's biographer wrote (in 1951) "...Wetzler brought out two volumes of songs. No great sensation was of course to be expected, Wetzler being a very minor publishing house..." Indeed, one can sympathize with Wolf's ambition to be published by a more serious house such as Breitkopf or Peters, since his works were much more serious, both in terms of texts and musical language, than the popular items in the Wetzler catalog. Furthermore, the publisher was in financial trouble and in fact within a year had to sell out to Doblinger, another popular publisher.

Fortunately, and in hindsight inevitably, Wolf's talent, while scorned by some critics in the musical press, with such vicious epithets as "oddly banal melodies and ludicrous harmonic convulsions", was finally recognized by several influential names in the musical world, and his reputation spread rapidly. The first supporter was the composer Engelbert Humperdinck (1854-1921), who was only 6 years older than Wolf, but who was about to achieve fame and fortune with Hansel and Gretel in 1893. In his capacity as consultant (Lektor) for Schott in Mainz he recommended Wolf's songs for publication, and Schott duly republished Wetzler's two volumes, followed by the first edition of Italienisches Liederbuch in 1893.

The second, contemporaneous, supporter of Wolf's songs was the critic and musicologist Joseph Schalk (1857-1900), who wrote an enthusiastic article entitled "Neue Lieder, Neues Leben" in the Münchener Algemeine Zeitung in 1890. A third was the singer Ferdinand Jäger (1839-1902), a Wagnerian with an international reputation, who from 1888 performed Wolf's songs whenever possible.

However, it must be admitted that in some respects Wolf was his own worst enemy; he slowed down the publication process by obsessive attention to detail, such as the number of staves per page and the width of margins, which was no way to launch a young and as yet unknown composer's career. This attitude can be seen in his dealings with Wetzler, C. Lacom and Schott.