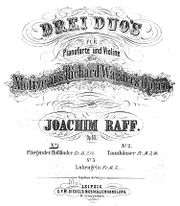 Raff duos first published by ter Meer in 1856, reprinted by Siegel in 1871

Ernst ter Meer operated in Aachen from 1848, publishing small-scale works by well-known composers of the day: Kalliwoda, Raff, Reinecke, violin works by Hauser and piano works by Louis Kohler. It was bought by Siegel in 1853, although HMB lists its works until 1858.

Incidentally, there were many music publishers in Aachen in the period 1830-60: Meyer, Roschutz, Cremer, Benrath, ter Meer and Hensen, but only two from 1870: Jacobi and Naus. Schweitzer started in 1900.

Ernst ter Meer's plate numbers were issued in a regular chronological fashion. Plate numbers are in the format of #### . Dates in italics are estimated.