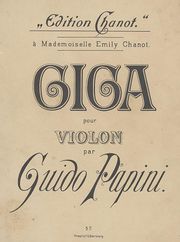 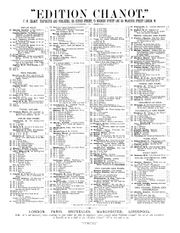 This London-based firm was founded by Frederick William Chanot (1857-1911) in about 1890, and published mainly violin music for at least 20 years. It seems to have co-operated with Laudy & Co.

At least two works by Elgar were published by Chanot: Very easy pieces in the first position for violin with pianoforte accompaniment, Op. 22, and Etudes caractéristiques pour violon seul, Op. 24.