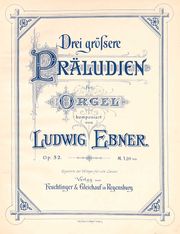 This firm, founded in Regensburg, Bavaria in 1891 was a leader in the renewal of Catholic church music in the early 20th century, representing the Cäcilienverein. Carl Proske was an important figure in the early years.

It was later bought by the diocese of Regensburg in 1977 and absorbed Friedrich Pustet, another catholic publisher, in 1978. Manfred Kern, the present owner, entered the firm in 1978 and bought the firm from the diocese in 1987. It still operates as a publisher and retail store in its home town.

Feuchtinger & Gleichauf's plate numbers were issued in a regular chronological fashion. Plate numbers are in the format of F&G ###. Dates in italics are estimated.