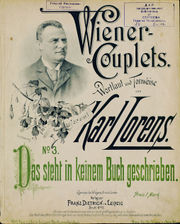 This firm operated from 1883 in Leipzig, and was famous for popular songs, especially Couplets. These were satirical songs performed in various cabarets and theatres in the main German-speaking cities such as Vienna, Berlin and Munich. They were in local dialect with many topical themes; for example the newly-discovered X-rays in Franz Damm's Professor Röntgen’s X-Strahlen: „Röntgen’s Licht, die neust’ Erfindung“. of 1896.

Berliner Couplets writers included Paul Lincke (1866—1946) and Julius Eberius. Sadly, because of the lack of coypright laws, very few of the writers made much money for their efforts.

Franz Dietrich's plate numbers appear in the format of F.D. ###.