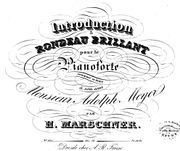 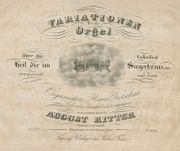 Friese of Dresden operated from 1823 to 1866.
The firm was founded by Carl August Friese in Pirna, near Dresden, in 1803. Carl's son, August Robert Friese (1805-1848) took over his father's store in 1828 and in the same year opened a publisher/bookstore "AR Friese" in Dresden. He returned from Dresden to Leipzig in September 1833 and founded a new branch of his operation.

In July 1837 August Friese bought Robert Schumann's Neue Zeitschrift für Musik. Friese was involved in the democratic movement of the 1848 revolution, in which his friend Robert Blum (1807-1848) was a leader and martyr. His main role was as publisher of the liberal newspaper Sächsische Vaterlands-Blätter. He caught pneumonia at a political meeting in March 1848 in Leipzig and died a few months later, leaving a widow and six children.

Friese's store seems to have ceased business or was bought in 1866.
The company published mainly songs and piano pieces, and composers included Felix Mendelssohn, Clara Schumann (Andante & Allegro for piano) and Stephen Heller among others.