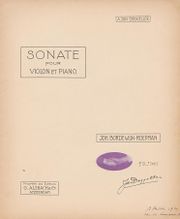 The company was founded by Carl Georg Alsbach (1830-1906) in 1866. In 1898, G. Alsbach & Co purchased Brix von Wahlberg, which was another Dutch publisher. Among the many scores added to their collection, the most important were Dutch compositions. In 1903 his son, Johann Alsbach (1873-1961), took over the publishing house and laid out the groundwork for what would be called the "Dutch Music Archive". This would include almost all the works of Dutch composers published since the 19th century, amounting to almost 14,000 scores. In 1939 his collection was presented to the Dutch Foundation for Music Interests, where it was later transferred in 1982 to FCA. The music is currently located at the Gemeentemuseum Den Haag.

Plate numbers are in the follow format: G.A. & Co. ####. Dates in italics are estimated.