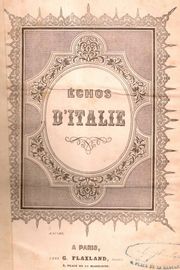 The publishing house was founded in 1847 by Gustave-Alexandre Flaxland (1821-1895), shortly after his marriage to Fanny d'Eresby, by the purchase of a small Paris retail establishment located at 4 place de la Madeleine. The shop was very successful and Flaxland expanded the business into the publication, after 1850, of vocal music anthologies (Echos de France, Echos d'Italie, ...d'Allemagne,... de Pologne,... du monde religieux,....du temps passé,...). The company's growth was accelerated by the acquisition of the French publishing rights for much of Robert Schumann's music (all works for piano; trios Opp.63, 80, 88, 110, 132 ; quartets Opp.41,47). Flaxland was the first in France to publisher the Lieder with the German original text.

As a friend of Wagner, he secured the French publishing rights for some of his earlier operas - Rienzi (December 1859), Der fliegende Holländer, Tannhäuser, and Lohengrin.. He also directed the publication of the first compositions of the young Saint-Saëns and Liszt's Wagner transcriptions. On December 30, 1869 Flaxland sold his entire catalog of nearly 1400 titles to Durand, Schoenewerk et Cie..

He devoted his remaining years to composing and piano manufacturing.