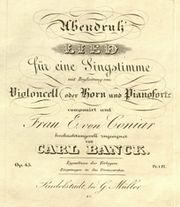 Following in the footsteps of his older brother, the composer and clarinettist Friedrich Müller (1786—1871), G. Müller, born in 1799, entered the court Kapelle in Rudolstadt in 1814. Rudolstadt, a small town on the river Saale in Thuringia was a significant cultural certer, as can be judged from its important music library. In the 1820's Müller started a music store and publishing business, which lasted until 1862.
G. Müller published mainly songs and piano music. Typical composers were his brother, Banck, Franz Lachner, Peinemann and Reissiger. There were two long series of piano pieces: Musikalische Volksbibliothek (1843-60) and F. Brandenburg's Opern-Klänge (1843-62).