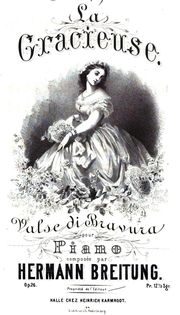 Heinrich Karmrodt published mainly popular works in Halle, near Leipzig (best known as Handel's birthplace) from 1852 to 1895. The catalog was mainly of piano pieces and songs by composers such as Joseph Schulz and Tschirsch, but there were a few sacred items by August Brandt, and several items by Robert Franz (1815—1892), a local composer: some arrangements of Bach and Mozart for piano, and the vocal scores of Baroque works such as Astorga's Stabat Mater (1864, later published in 1878 by Breitkopf of Leipzig and Novello of London). Production was slow but steady, about four items a year for 40 years.