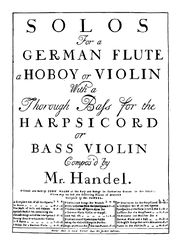 John Walsh (1665 or 1666–1736) was a publisher, instrument maker, and music retailer, who established himself in London by 1690. Walsh was the pre-eminent English music publisher of his day. He was the first publisher to be named as music seller to the crown.2

Walsh began publishing together with John Hare in 1695; John Playford (1623–1686/7), who had previously dominated the field had died, and his son was inadequate as a businessman to maintain the house. Walsh thus encountered a distinct lack of competition, and "engraved music soon appeared from his premises on a scale previously unknown in England."1. Many of Walsh's editions were pirated from other publishers, and this accounts for much of the variety in his catalogue. It appears that he had managed to establish business relations with Estienne Roger by 1716, however, and his imprint and other marks can be found on several Roger prints. Walsh was astute at cost-saving, and found many ways to streamline his publications, and to make them more cost-effective. However, he often (at least early on) provided lavish title pages for publications. Walsh was quick on the uptake, always keeping abreast of new developements and advertising to great effect. By 1710, he was widely recognized as the most important publisher in England, even though competition was springing up and piracy was rampant. Handel had Walsh print Rinaldo in 1711, and from that Walsh claimed to have made £1500.

When John Hare died in 1725, his son Joseph took his place until his death in 1733.3
"Besides Hare another music seller joined with Walsh. This was P. Randall, who had a shop in Paul's Grave Court, without Temple Bar, at the sign of the Violin and Lute. The date for this is 1707-8, but before 1711 P. Randall seems to have abandoned his own shop and entered into some kind of partnership with Walsh, for the imprints give the Catherine Street address for both names. If we might assume that P. Randall had married into the Walsh family — say with Walsh's daughter — it might, in some degree, account for his presence on the Catherine Street imprint, and also for the circumstance that a William Randall (possibly his son) was, on the decease of John Walsh, junior, in possession of the business. This is of course only guess work, and no doubt an examination of the registers of some of the neighbouring churches might reveal more particulars."3

Walsh died on March 13, 1736 (leaving from £20,000-30,000). His son, also John Walsh, took over the firm. Walsh (ii) was noted as an instrument maker, becoming appointed maker to the king in 1731. At the same time, Walsh (ii) began numbering all of the firm's publications. Kidson again:
"During a certain period, the commencement of which I have not been able to definitely fix, Walsh, senior, affixed numbers to his publications ; these appear to be consecutive and indicate a date of publication. I have notes of works bearing numbers between 58 and 683, and ranging in date from probably about 1725 to 1736-7, for after the senior Walsh's death the son does not appear to have long continued the numeration; it is also pretty certain that the elder publisher did not by any means number all his publications during his period."3

Dating Walsh publications is generally no simple matter, as very few had a date printed. Kidson:
"Another particular which may be worth while noting, as tending to fix a date, is the different spellings of the name of the street. In the very earliest imprints it is spelled as in the modern way, "Catherine," varied with "Katherine," but while these two modes of spelling were used more or less indifferently at the same period, I cannot recall any imprint where the K is used later than 1718-20, though it was very generally used by Walsh about 1705 to 171 5. At a certain later date, during the son's time, and from about 1745 to 1760, "Catharine" is spelled with a centre "a" instead of an "e." "

It was Walsh (ii) who published Handel's later works; the Organ Concerti (Op. 4) were dedicated to him. As a retailer, he sold the work of other publishers, and absorbed several smaller publishers upon their liquidation. When he died (15 January 1766), he left £40,000. William Randall took over the business until 1783, whereupon it was absorbed by Wright and Wilkinson.