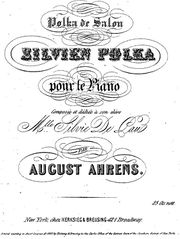 Kerksieg & Breusing of New York published popular music—songs, dances and piano pieces—starting in the 1840s. Gustav Schirmer, Sr. (1821–1893) was manager of the company by 1854. Along with his colleague Bernard Beer he took this company over in 1861 to form Beer & Schirmer, which became G. Schirmer in 1865.

Typical publications of this firm were dances by August Ahrens and piano pieces by Hermann Adolf Wollenhaupt.