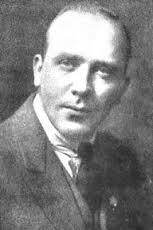 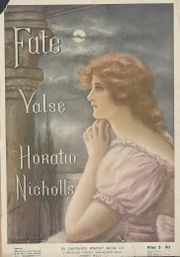 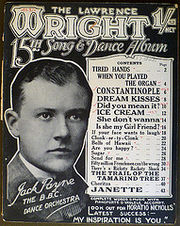 Lawrence Wright (1888-1964), a British popular song composer, founded his firm in 1910. He negotiated the UK rights to many US song composers, such as Hoagy Carmichael. Wright was very imaginative in publicizing his firm's songs. Occasionally he would promote songs by eye-catching stunts, such as riding a camel around Piccadilly Circus to publicize Sahara in 1924. Additionally, in 1922 he started the pop music paper Melody Maker, which although it merged with its rival New Musical Express in 2000, and became online only in 2018, is still appearing nearly 100 years later. The firm published many comedy songs such as Burlington Bertie From Bow and Yes, We Have No Bananas.
Besides his work as a publisher, Wright was both an impresario and a composer. Using the name Horatio Nicholls he published 500 songs including Among My Souvenirs.
After he died Lawrence Wright Music was sold to Dick James, the publisher of the Beatles' repertoire in Northern Songs, and record producer, in 1965.