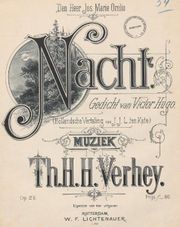 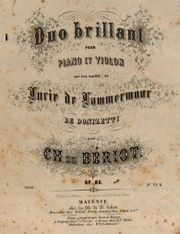 Friedrich Ludwig (Louis) Lichtenauer of Hannover (?-1849) started as a representative of Schott of Mainz in Rotterdam in 1843, and was soon joined by his older brother Wilhelm Franz, to whom he sold the business. Wilhelm Franz became independent of Schott in 1864, and died in 1877, leaving the firm to his widow and his son Johan Christiaan (?-1937), who finally became the owner in 1900. His son Alexander Wilhelmus Aalbert joined the firm in 1929 and was the owner from 1937. The premises and stock were destroyed in the bombing of Rotterdam on 14 May 1940, but the firm finally relocated to the concert hall "De Doelen" in 1966.
HMB shows that Lichtenauer published 200 works by Dutch composers such as Kruijs, Verhey, deLange and Willeke between 1853 and 1900.