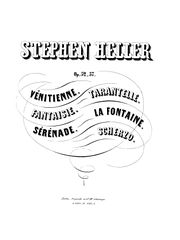 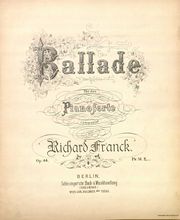 The name actually refers to two different, but related, publishers. The original firm was founded in Berlin in April of 1810 by Adolph Martin Schlesinger (1769-1838). The German company was run by his third son Heinrich (1810-1879) after the eldest son Maurice (1798-1871) established his own firm in Paris (the second son, Carl, having died in 1831). Schlesinger soon established relationships with Spontini, Loewe, and Weber - who signed a contract for exclusive publication in 1814.

Shortly before his move to Paris, Maurice traveled to Vienna in order to establish contact with Beethoven. The trip was successful, resulting in Schlesinger's publication of Beethoven's Opp. 108-112, 132, and 135. Contracts were issued to the prodigy Felix Mendelssohn shortly later, which led to the first publication of J. S. Bach's St. Matthew Passion shortly after Mendelssohn conducted its revival in 1830. The Berlin firm's catalog consisted of over 2000 titles by 1836. Prominent publications of Heinrich's tenure (1840-1864) included works by Berlioz, Cornelius, Liszt plus an important series of posthumous issues of piano works by Chopin. The Berlin company was sold to Robert Lienau in 1864. Lienau continued to use the Schlesinger name and plate numbering system well into the 20th century.

The Paris firm was founded by Maurice Schlesinger no later than 1821. In 1822-23, Schlesinger published authentic (and first) editions of Beethoven's Piano Sonatas, Opp. 110 and 111. Despite a disastrous fire which destroyed numerous manuscripts, including a number of Beethoven letters in 1826, Schlesinger managed to issue the composer's late string quartets, Opp. 130, 132, 133, and 135 in the next year. Complete editions of Beethoven's piano works, string trios, quartets and quintets were initiated by 1829. The 1820s also saw the publication of substantial amounts of piano music by other composers, including significant collections by Moscheles, Weber, and Hummel.

Works of Mendelssohn, Liszt and Berlioz were added in the next decade, along with a number significant opera publications including first editions of Meyerbeer's Robert le Diable and Les Huguenots, Halevy's La Juive, and Donizetti's La Favorite. Richard Wagner was employed by Schlesinger from 1840-1842 to make piano arrangements from La Favorite and Halevy's La Reine de Chypre. From 1835, Schlesinger also published the important periodical Revue et Gazette Musicale, which continued publication for 45 years.

The waning years of the 1830s and early 1840s saw the addition of works by Heller, Thalberg, Lanner, Labitsky and Johann Strauss Jr, along with some 40 works of Frederic Chopin, including many first editions. Maurice Schlesinger was reputed as being imaginative, reckless, hard-nosed in business and an infamous rogue. He was involved in legal disputes with other Parisian publishers such as Escudier (1839) and Troupenas (1841) and with the composer Gioacchino Rossini (1843). He sold the business, which had grown to some 4200 titles, in 1846 to Brandus et Cie. and retired to Germany a few years later.

A. M . Schlesinger's publication (Berlin) plate numbers generally use the schema S. #### for numbering, while those of Maurice Schlesinger employ the M. S. #### schema. However, since the two firms jointly issued a number of titles, there are naturally exceptions to these rules (letter prefixes dropped, used partially, etc.).

Unless otherwise indicated all plates have a prefix of S. Dates in italics are estimated.

--- N.B. again, as noted several times above: Items offered after 1864 (or 1864 or later? look carefully at the title page) from Berlin belong not to this table but to that on the Robert Lienau page.

Plate numbers are in the format of M.S. ####. Dates in italics are estimated.