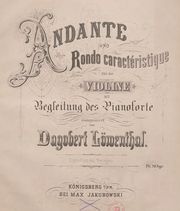 This firm operated in Königsberg, East Prussia (later basically destroyed in World War II and now Kaliningrad in Russia) from 1866. It published mainly piano pieces (dances and salon pieces) solo songs male voice choir songs and at least one opera (Harald, der letzte Sachsenkönig by Gustav Dullo, a lawyer). It may have been connected to Jakubowski & Zadurowicz of Lemberg/Lvov (founded 1893), but it did not become the latter: both were publishing at the same time (it seems), publications by Max Jakubowski in the last years of the 19th century being noted by HMB.

Plate numbers are in the format of M J ###. Dates in italics are estimated.