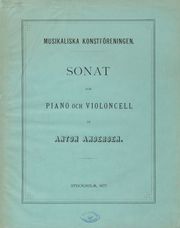 The Swedish Art Music Society (Musikaliska konstföreningen), founded in 1859, is a non-profit organisation with the aim of publishing Swedish art music. Each year a small number of works are published. Often, contemporary music is chosen, but sometimes they publish older masterpieces which have remained unpublished.

The first publications in 1860 were by Ivar Hallström and August Söderman. Other composers of the 200 mainly instrumental works since then include Hugo Alfvén, Wilhelm Stenhammar, Wilhelm Peterson-Berger, Ture Rangström, Lars-Erik Larsson, Gunnar de Frumerie, Dag Wirén and Karl-Erik Welin. They also co-produce (as is not unusual in music) with other companies (e.g. Erland von Koch's string quartet no.2 Op.28 was copublished by this company and by Nordiska Musikforlaget in 1946, with "N M S" plates.)