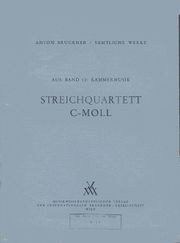 Musikwissenschaftlicher Verlag (MWV) was founded in 1933 by the Internationale Bruckner Gesellschaft (International Bruckner Society) in Vienna for the purpose of publishing a complete critical edition of the works of Anton Bruckner. The general editor of the first complete edition was Robert Haas, working together with Alfred Orel. After Orel’s resignation (1937), Leopold Nowak became Haas' co-editor. In 1938 the IBG was absorbed into the German Bruckner Society and the firm was dissolved in Vienna and transferred to Leipzig. In 1944 it was renamed Bruckner-Verlag Leipzig. Shortly before the end of World War II the publishing stock was destroyed by the Allied bombing of Leipzig. Along with works of Bruckner, a similar edition was started for those of Hugo Wolf. Thanks to the war and chaos in its wake the first complete editions for both composers were left incomplete.

In 1946 the IBG was re-established and the headquarters of MWV returned to Vienna with the aim of a new start for the complete edition. Between 1951 and 1989 a major part of the of the complete works of Anton Bruckner were published under the general editorship of Leopold Nowak. From 1989-2002 Herbert Vogg continued its editorship in the spirit of Nowak. From 1960 MWV also published the critical complete edition of the works of Hugo Wolf under the general editorship of Hans Jancik, followed by Leopold Spitzer from 1991. As well as the two complete editions, the publishing program includes musicological literature specializing in Bruckner and Wolf, including a complete edition of the letters of Wolf along with the publication series of the Anton Bruckner Institut Linz and the Anton Bruckner Research Centre at the Austrian Academy of Sciences. It is represented by Barenreiter of Kassel.