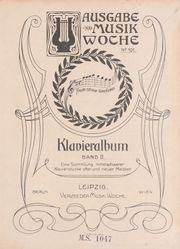 Die Musik-Woche and Die Musik-Welt was a short-lived German publishing venture in the first decade of the 20th century.

Verlag der Musikwoche of Leipzig published mainly short items of piano music, by Brull, Reger and others, from 1901 to 1910. There were also some vocal items by Zapff, Egger, Radecki and others, and some classics such as Beethoven piano sonatas.