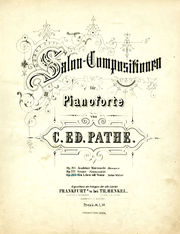 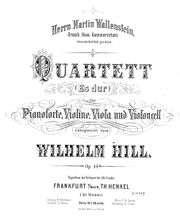 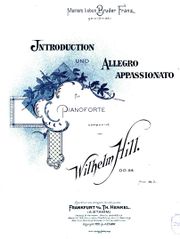 This little-known firm was active from 1854 in Frankfurt am Main. Its relatively small output (300 items in 50 years, according to HMB) was mainly of light and domestic works: songs for both solo voice and male chorus, piano pieces including many dances and marches, and violin and cello pieces.

On the other hand, in addition to these popular items there was a handful of more substantial chamber music works, such as violin sonatas by Moritz Weyermann (1832—1888), Wilhelm Lutz and Wilhelm Hill (1838—1902) in 1868, 1874, and 1878, and also, in 1865, a string sextet Op.15 by Ferdinand Wilhelm Dietz (1833—1897). In fact Henkel published about half of Hill's 60 works, including, beside many light works, both his piano trios, (Op.12 and Op.43) and his piano quartet. It seems that composers with serious aspirations deserted Henkel for more famous publishers, such as the local Johann André in Offenbach, Schott in nearby Mainz, or the famous Leipzig houses. In the 1890s the business was acquired by A. Stamm.

Henkel's plate numbers were in the format of T.H. ### or ### (the prefix was apparently dropped by the 1890s perhaps after the firm was acquired by Stamm).