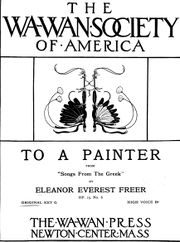 The Wa-Wan Press (1901-1912) was founded by the American composer Arthur Farwell. The firm operated out of the Farwell family home in Newton Center, Massachusetts.

The name of the press was taken from a traditional ceremony among the Omaha. Farwell was among a growing number of American composers who found inspiriation for their compositions in the music of Native Americans and American folk tradition. Farwell had composed a compilation of American Indian Melodies but was unsuccessful in finding a publisher and so founded his own publishing company to print it and hoped his firm would spearhead a revolution in American music against a German-dominated outlook. The object of the press as stated by Farwell was "primarily to publish the most progressive and significant compositions by American composers, wholly upon consideration of artistic merit; and secondly to give due attention to the development of the various forms of primitive folksongs in America–a development that is playing an ever more important part in the growth of American music."

From 1901 to 1906 the company published two books - one vocal and one instrumental - every quarter on a subscription basis. From 1907 publications appeared monthly and the press eventually began publishing in sheet music form. Publications of the press were noteworthy for their inclusion of introductions and essays written by Farwell, program notes by the composers, and artistic cover designs often by Farwell himself. By 1912 with the firm facing financial problems and declining subscriptions and with Farwell himself devoting more time to other occupations and interests control of the press passed to G. Schirmer which quickly abandoned the project. During its existence the Wa-Wan Press published the works of thirty-seven composers (nine of whom were women).

The press' entire output(?) was reprinted in five volumes in an edition by Vera Brodsky Lawrence (New York: Arno Press, 1970).

The Wa-Wan Press did not use traditional plate numbers but instead used either no plate identification or an abbreviated version of the work's title followed by a number representing the total pages.