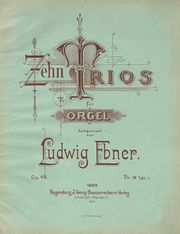 Boessenecker published music from 1863 until 1913 in Regesburg, Bavaria. About half the items were popular dances, marches and songs, and half music for Catholic church use. There were several series, such as Musica Ecclesiastica (17 volumes 1877-) published for the Cecilia-Vereine, an association for the improvement of Catholic church music. The firm was bought in 1913 by Coppenrath of Regensburg, which also published much liturgical music.

Boessenecker's plate numbers were issued in a regular chronological fashion. Plate numbers are in the format of JGB ### V. Dates in italics are estimated.