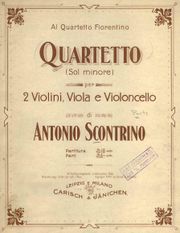 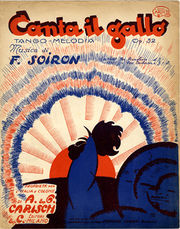 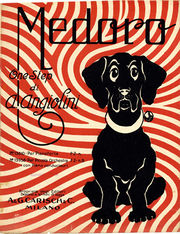 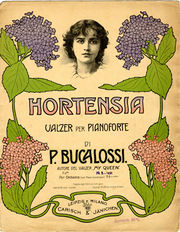 The Swiss Giovanni Andrea Carisch and Arturo Jänichen started this Milan firm as a retail music instrument store in 1887.

Publishing began in 1894. In the first 40 years of the 20th century the firm published a vast amount of popular music, with eye-catching covers (see other sample covers here). After the 2nd World war they entered the record business (1949). Soon it was a major Italian label representing singers like Peppino di Capri, and handling Italian distribution of the Beatles' records.

After hard times in the late 70s, Maurizio Carisch, (5th generation since the founder) went into light music, such as that of the Sanremo Festival, with singers like Zucchero, Vasco Rossi, Ligabue, Bocelli, Pausini, and Ramazzotti.

Finally in 1989 Maurizio Carisch sold out to Warner Chappell Music Italiana which started international expansion: In Spain in1993 they founded la Nueva Carisch España, which bought the Music Distribucion catalog in 2000, and Real Musical in 2006. In France they bought Imp France in 1998 and Musicom in 1999, creating Carisch Musicom. In 2002 the Monzino group, a publisher dating back to 1772, bought Carisch, and in 2008 became a Società per Azioni with two divisions : sheet music and audio systems.

Sometimes plain, sometimes C. ##### J. or C. #####. Ignoring the prefix/suffix unless this proves significant for dating. Likewise keeping Carisch & Jänichen and Carisch S.p.A. in the same table unless they overlap, etc.

The Bloch 17135 plate may be from its 1936 first edition, not the 1957 publication we have. Hopefully acquisition of the first edition will clarify, and allow us to be more sure of the table data.