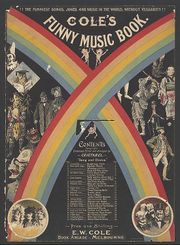 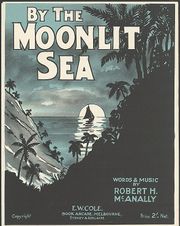 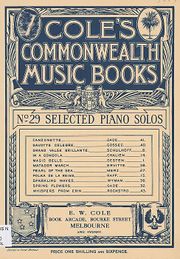 Edward William Cole (1832-1918) emigrated to Australia from England in 1852 and started a bookshop in Melbourne in 1865. He was a talented retailer and the bookshop prospered until the turn of the century, finally closing in 1928.

Cole started a publishing house in the late 1870s, issuing popular titles such as Cole's Funny Picture Book (1879). From 1880 to 1925 Cole, along with Allan & Co, was the most important music publisher in Australia; the catalog grew to include many reprints of popular British and American songs and dance music. There were may cheap albums in series such as Cole's Copyright Albums, Cole's Commonwealth Music Books and Cole's Piano Folios. Cole's trademark was a bright rainbow design.