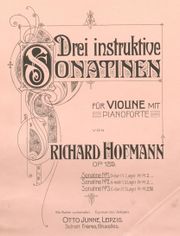 Friedrich Moritz Geidel, born in 1847 in Dewitz near Leipzig, was an apprentice at C.G. Röder (founded 1846). He set up his own engraving and printing firm in 1898, growing to 200 employees. His son Fritz succeeded him in 1912 and managed the firm for 60 years.
It became an 'offenen Handelsgesellschaft' in 1935 with Johannes, Rudolf, Fritz und Werner Geidel as owners. There were many changes after the war: in 1945 Rudolf Geidel became the sole owner. The firm became part of VEB (State-owned company) Messe- und Musikaliendruck in 1962. Two family members left the firm: Werner Erich Geidel moved to West Germany in 1965, and Fritz Arthur Geidel retired in 1971. Finally, after German re-unification, in 1992 Dr. Rolf-Peter Geidel und Christian Geidel continued the business.