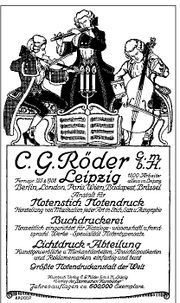 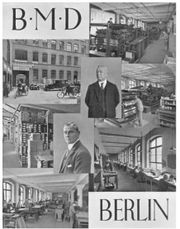 This was the major music engraving and printing firm of the 19th century.

It was founded by Carl Gottlieb Röder (1812-1883) in 1846 after he had served a decade's apprenticeship with Breitkopf & Härtel. Röder was the first to successfully adopt lithographic printing technology to music (1863). As a result, the number of sheets printed per minute jumped from 30 in 1860 to 300 in 1865. Combined with vastly improved distribution on the new railway system, and increasing affluence and piano ownership, a new mass market appeared, and this was eagerly supplied by a growing number of publishers from 1860 to 1914. Successful execution of orders from Edition Peters was particularly important in proving the reliablity of Roder's new technology from 1867.

Under the management of the founder's two sons-in-law the firm rapidly grew to be the largest of its kind in the world, with over 1000 engravers employed in the production of engraved scores for nearly all major publishers. Growth was steady and rapid, from 100 workers in 1865, to 250 in 1871, reaching a peak in 1913: C.G. Röder GmbH had branches/offices in Berlin, London, Paris, Vienna, Budapest and Brussels. 35 letterpress and 34 collotype presses, 62 musicnote rotary and (chromo) litho presses were in use, plus 53 handpresses for (copper) music note printing and litho process. The workforce: 1150 people. Another 100 workers were employed at the Berlin branch plus a total of about 500 people worked at Röder printing works in London and Paris.

Röder became a publicly traded company in 1930, three years after the death of the Röder's last successor Carl Johannes Reichel. The firm's Leipzig facilities were heavily damaged in WW II and it was subsequently nationalized by the Communist regime (1947) - operating as Röderdruck. During this era, the Soviet State Music Publisher, Muzgiz, had some of its more important volumes engraved and printed there. In 1972 the company merged into Offizin Andersen Nexö, a 200-year old book printing concern, named Drugulin from 1868 to 1954. The old Röder facilities in Leipzig have apparently been converted into rental space operating under the name Saxonia Loft GmbH Projekt ehemalige Notendruckerei C.G. Röder.