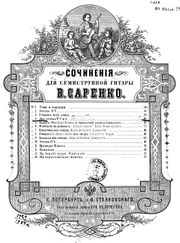 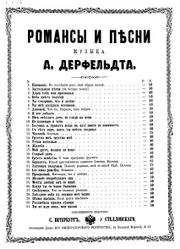 F. Stellovsky (Ф. Стелловский, 1826-1875) of St. Petersburg was active in the mid 19th century. Its main distinction was that it published the first score of Glinka's Ruslan and Lyudmila in 1856. HMB shows that some of its works were distributed by Schlesinger of Berlin in the 1860s. It published many works for guitar by Andrei Sychra and Vasily Sarenko, and many songs by Anton Derfeldt. The firm was taken over by Gutheil in 1886.