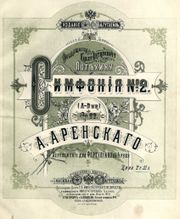 This firm was founded in 1859 by Alexander Bogdanovich Gutheil (1818-1883), who had emigrated to Russia from Frankfurt am Main in 1853. Gutheil's concern was the major competition for Russian publishers P. Jurgenson and Bessel, especially after the merger of the Gutheil firm with the older St. Petersburg publisher F. Stellovsky, whose catalogue dated back to 1810 and included composers Balakirev, Dargomizhsky, and Glinka. Karl Alexandrovich Gutheil (1851-) was the manager of the Stellovsky firm when his father died (1883) and facilitated the merger three years later.

Most important in the later years was Gutheil's promotion of the young composer Sergei Rachmaninoff, whose entire output except a few works was issued by the firm starting in 1892. The company was sold to Serge Koussevitzky in 1914 for 300,000 rubles and became an imprint of his Editions Russes de Musique.

Although Moscow continued to be listed as the principal address on the Gutheil imprint until around 1930, the firm had been merged with Koussevitzky's Editions Russes de Musique whose actual headquarters were located in Berlin, with a branch office in Paris. Koussevitzky sold the combined firm to Boosey & Hawkes of London in 1947.

Gutheil plate numbers are typically enclosed within the letters A. #### G.