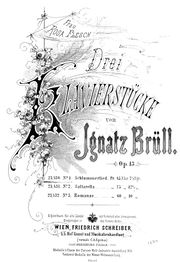 Friedrich Schreiber started this short-lived Viennese firm in 1873 by taking over C.A.Spina which had acquired Diabelli in 1858, but sold out to August Cranz in 1879. What it lacked in longevity it made up in productivity: Hofmeister's Monatsberichte lists 674 works published between February 1874 and October 1876, mostly waltzes by Strauss and others. It also published many piano works by Ignaz Brüll, and at least one curiosity: an arrangement of the violin and cello parts of both Beethoven's and Mendelssohn's complete piano trios for harmonium (L.A. Zellner, 1875).

Friedrich Schreiber's plate numbers are of the format of F.S.####. Dates in italics are estimated.