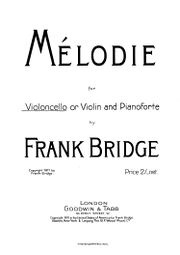 Goodwin and Tabb, a firm that has run a music hire library since 1826, started publishing music in 1906 and continued until the 1950s. Like many other publishers, it was part of the Music Sales group until 2018, when Music Sales sold its printed music division to Hal Leonard.
Its catalog was exclusively of British contemporary composers, starting with Hurlestone. From 1906 to 1920 it published Holbrooke, Bridge, and Dunhill. The promotion of new works was an uphill task, with little reward. As we read in one obituary notice of Felix Goodwin 1935: “He often made gallant efforts to secure performances for the works in the library (the Robert Goodwin Library of Manuscripts). It was indeed more often a labour of love than of profit for a band of composers scattered by the rush for things foreign.” Many new items appeared in the 1920s by Bliss, Gibbs, Howells, Boughton, Ashton, Rowley and Dudley. The most famous work in its catalogue was the first edition of Holst’s ‘’The Planets’’. A few new works were added in the 1930s, mainly by Bantock, and in the 1940s by Bridgewater.